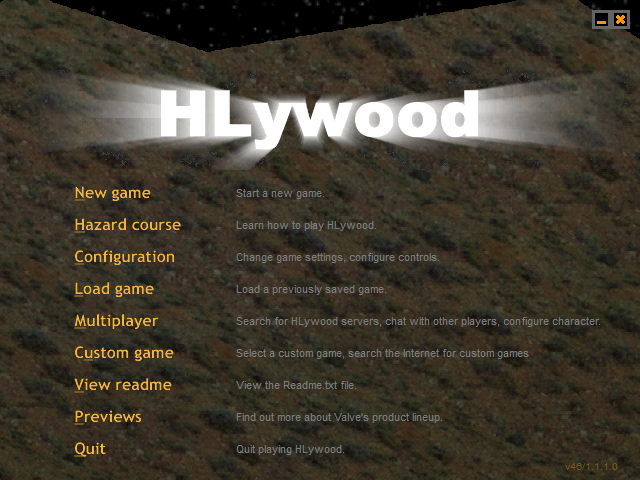 "Map a movie" Competition file.
Description: A Map utilizing sounds from various movies.
Competition Map where the player must escort the two actors (Barney and Scientist)
safely to their agent (Gman). They must survive against several monsters.
Normal HL sounds were replaced with clips from movies. A scene from Independence Day
happens when the player looks through the movie camera in the studio.
You may notice that I continued working on this map after the competition deadline. Don't
worry, I didn't cheat; and Atom didn't grant me any special favors.
I turned in a version on time for Atom to judge. Then I kept working on it because
there were things I wanted to improve for public viewing. If you would like a copy of
the bsp that Atom actually judged, just e-mail me at slayera@cox.net.
Contents:
HLywood folder... contains everything needed to play the mod. This must be played using
custom games menu or else the sounds will not be correct. Do NOT use these files to replace
existing files in your HL directory.
Move the entire HLywood folder into your ...Sierra/Half-life directory and play
HLywood from the custom games menu.
Credits:
Movie clips were downloaded from moviesoundcentral.com, funwavs.com and wavecentral.com
Clips were used from the following movies, all copyrights belong to their respective movie:
Silence of the LambsStripes
The Big Lebowski48 Hours
The Matrix2001: A Space Odyssey
SpaceballsLord of the Rings
The GodfatherThe Terminator
Star WarsDirty Harry
Full Metal JacketFast Times at Ridgemont High
Austin Powers 1 & 2The Breakfast Club
Toy StoryWargames
007 View to a killMonty Python's Holy Grail
The ShiningThe Three Stooges
WillowLiar Liar
InnerspacePulp Fiction
Strange BrewMajor Payne
The Blues BrothersOffice Space
Uncle BuckRaising Arizona
Forrest GumpUp in Smoke
TombstoneSouth Park The Movie
**The Simpsons (I know its from TV, but it was too funny to resist. Smack Barney
and you'll see what I mean.)
I must give a nod to the 'Deliverance' mod which is the first place I saw the idea of
escorting characters through a level.
Note:
These files may be used in any way TWHL permits.